Psychopomp and Circumstance – The Hen and Chickens, 19-30 November 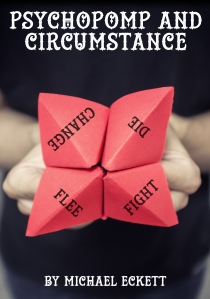 Psychopomp and Circumstance is a collection of five new plays by Michael Eckett about life, the afterlife and after afterlife. Enter a world of weirdness, witticisms and whimsy as we meet the spirits who carry souls to the world beyond. Some ensnare their prey with tales, some are overly dedicated and others just want to melt squirrels.

The plays include black fantasies, a dark folk tale and an existential, absurdist comedy. They each deal with themes of choice versus fate, the necessity of change and the pitfalls of an unwillingness to let things go.

I met with Jackie O’Sullivan, who along with partner Michael Eckett, form The Sigil Club, a company formed to present traditional theatre practices mixed with pop-culture touchstones to excite a wide audience and present new ideas.

17% was interested in the show because of the 12 roles, 8 are for women, (which of course we applaud, but see rarely). We asked Michael why he had decided to write so many roles for women in this show.

“It’s because we see so many plays with more male than female roles and it seems ridiculous to me that we live in a world where more than 50% of the population are women and yet that isn’t properly reflected in our art and media. And by working in fringe theatre for a few years now I’m constantly seeing swaths of new material with more men than women, or no women, or one female part, which was the girlfriend of the main character, which I found myself getting increasingly uncomfortably angry about. It seems even more absurd to Jackie and me because our experience in theatre has been counter to that representation. We are usually inundated with fantastic women auditioning for our female roles but have struggled to cast the male ones. I got fed up of having to turn away so many excellent female actors and practically it just makes sense to write roles you know you’ll be able to fill.

And personally, because as I have so many incredible female friends and role-models, who write so well on representation that they have inspired me to reassess how I conduct myself, what I believe in and what I write. Even in my past plays, Stand-Up Comics and Stripped, whilst the cast had been evenly split between men and women, the majority of the lines had gone to our male cast members. So I needed to make an effort to ensure I practice what I preach.

And, well, the last show we produced was a one-hour history of comic books with three male performers and one female performer; and it’s sort of impossible to cram the history of something dominated by male fantasy and not be hyper aware of a white male bias.

We have eight female actors in Psychopomp and Circumstance, their characters are noble, lazy, self-righteous, perky, insane, dedicated, smart, silly, endearing and terrifying. They play a small percentage of the kind of characters we should be seeing from female actors.”

A campaign to get more plays by women playwrights onto UK stages.
View all posts by 17Percent →
This entry was posted in news, plays, plays to see, theatre company and tagged Jackie O'Sullivan, Michael Eckett, Psychopomp and Circumstance, The Hen and Chickens. Bookmark the permalink.