Why and what Next? was 17Percent’s first ever event: a two day mini-festival of showcase and discussion events at the Red Hedgehog in north London.

We hope to run another festival event in the future.

The discussions:
The panel on Thursday discussed issues around why it was so few women make the transition from student to practising playwright and explored the reasons why people thought it was that so few UK plays by women actually get produced, this covered areas such as; who the gatekeepers are, less women writing in the first place, attitudes to rejection, attitudes to women’s writing: when a woman writes ‘kitchen sink’ drama it’s domestic, when a man writes it, it’s revelatory.

Friday’s focus was on what positive actions we can take to increase the number of plays being produced. This included advice to write what you are passionate about, not what you think people want you to write, write meaty roles for older actresses who are finding there are few good roles for them, and to do something every day to further your writing.The discussions and plays were recorded and are available as podcasts from the Downloads page. (You can also read a longer report on the event in March 2010’s newsletter, also available on the Downloads page.) 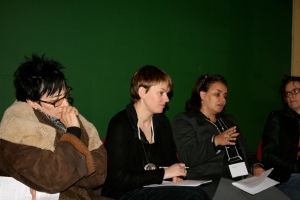