Review: Zero Down by Sarah Hehir 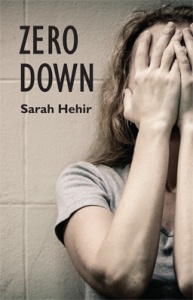 Following on from her well starred success with her first full theatre production Child Z, Sarah Hehir returns to the gritty social terrain where “having to” is the name of the game. Set in a nurses’ restroom at Silver Apples Care Home, possibly a week or two in the future, three trapped souls fret and fidget with one eye on a monitor waiting for something to do.

Leyla (Elizabeth Nicholson) is a dreamer, throwing her moves about the clothes prop as she pictures herself fronting her own pole dancing club, though only classy stuff mind. Erin (Sadie Tonks) is a tourist who may also be travelling on business, and she pictures herself elsewhere too. But she has aims not dreams. There is somewhere she has to go.

Both Leyla and Erin get their chance to project in the spotlight, one shaking her thing, the other accepting a Pulitzer. A chance to show us their future. But not Benny (Katherine Hurley). She doesn’t dream. One child down and Wonga on her back she stalks the set Kowalski -like spitting hate at Erin for her perceived upper class background, kicking off about immigrants, and gently bursting her old friend Leyla’s bubble.

And all the while like a dripping tap the unseen supervisor sits off stage dishing out threats to zero down anyone who takes too long or steps out of line.

Something here has to give, and of course it does. A great strength of the play is how the tension builds on an excellently thought out set, where the toilet is a place for the characters to be unseen but still felt. The only place you can signal for help…

Erin is of course, not quite what she seems. She is going to be a journalist come what may, and she has something on Benny. And here are the great moral questions that Hehir asks us to ponder. How much allowance can we make for a despicable act committed under the most intense pressure? And do the ends justify the means?

I have seen many, many dramatic stories but this play will keep you guessing till the end about what Erin will actually do about what she knows when it comes to it. She doesn’t have to act in any particular way. Her hand is not forced in the same way as those of her colleagues. If she called her dad he could stop it all…

The writer gives us a nuanced vision of people trapped in the race to the bottom where there are only shades of grey. Their own hand partly got them here to varying degrees but the eye in the corner is the only real villain on stage. This is no way to make a living, such as it is.

It is greatly refreshing to see an all female cast firing off each other in this claustrophobic setting. In an excellently paced production directed by Sophie Boyce, Katherine Hurley stands out as the blustering Benny, slugging long after the bell has rung. Her slow implosion when confronted with her deeds was a sight to see. Benny is unpleasant for sure, but it would be easy to make her a monster and neither writer nor actor did this. Also a word for Elizabeth Nicholson as the gentle soul, Leyla. A nice understated performance in a role that could easily have been just a foil for the other two protagonists.

One thing I would say is that the character of Erin does jar occasionally. We are given a hint that her life has been harder than she makes out but that is left somewhat hanging. The finale of the play hinges on the decision she has to make and this spectator was not convinced that any great torment was going on particularly. As Leyla says in a pivotal moment “What you’ve got there… it would ruin her life”, and yet I did not really feel that something important was taking place at that point. Just a touch “poor little rich girl” for my liking. Or maybe that’s all Erin is and we’ve all been had. That seems to be a thing with plays by this writer. You need to watch them again to see what you missed…

All in all though a most enjoyable and thought provoking production that I would certainly encourage you to go and see.

A campaign to get more plays by women playwrights onto UK stages.
View all posts by 17Percent →
This entry was posted in plays by female writers, Review and tagged review, Sarah Hehir, Zero Down. Bookmark the permalink.